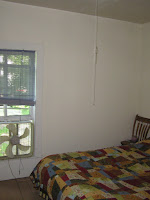 This was Avelyn's room. While dealing with our infertility we struggled with what to do with this room (the bed was the sellers)....we held off on doing anything in this room, expecting to get pregnant "any time now", then when it was apparent that we weren't going to be parents easily we closed the door and left it alone. Slowly, after getting pissed off at infertility, I decided to just do the room...someday there would be a baby in there. I painted it a neutral color. It was almost therapeutic, in that it gave me something that I could DO, since having a kid was something we didn't have control over.

I painted the room Behr's Disney "Christopher Robin's Swing" on the bottom and "New Day" on top. The middle section is a custom mix of the two colors. I had originally intended on putting Beatrix Potter wallies as a chair rail border, but decided against it. 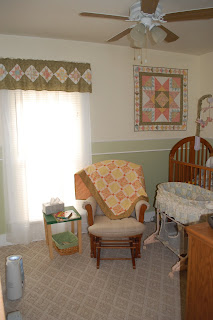 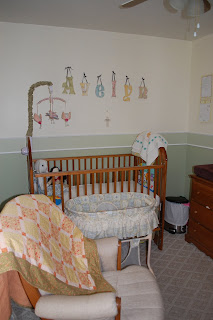 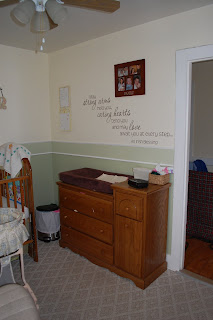 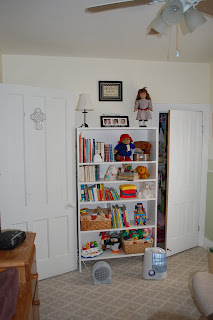 The carpeting we got from Lowes and installed ourselves, we had a new window installed in the room, ran some electric, installed a new ceiling fixture, and built the bookcase. We're pleased with how it came out and were even MORE ecstatic that there was a BABY in that room!


The Guest Room
We wanted our guest room to have the feel of a retreat...even though the only people who sleep in there are my aunt and uncle and their dog, and on occasion my sister (who ironically hasn't spent the night since A was born). 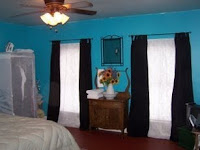 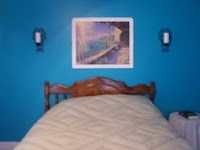 The paint was Behr's Mermaid Treasure, the print was bought on allposters.com, the wall sconces were on clearance at Kohls and the chest of draws with the picture is an antique from another aunt.

Of course with the arrival of our newest additions we needed a room for them. Since our guest room was used so infrequently {and lets be honest, was the only room left} that became their room. I had found curtains I had loved online, but were too expensive.

Then I found fabric and my MIL made the curtains. BUT the curtains made the walls look too green, so I had to repaint! We went with Behr's Jamaican Sea, which had a much more blue undertone. The floor was painted Behr's Bison Brown, a delicious chocolatey color. The monkey wall decal we got on Etsy. 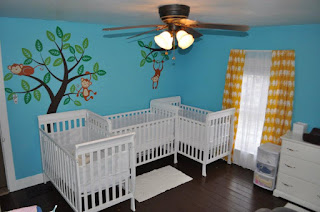 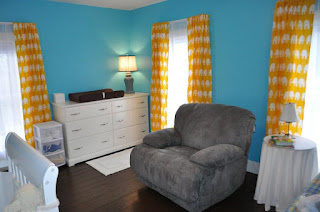 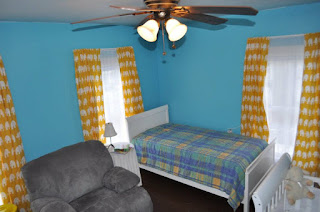 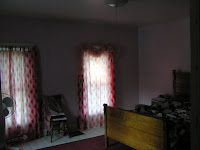 When we closed on our house the bedroom we chose for our own was painted this lovely shade of pink, with a small single bulb pull light from the 60s.
We just wanted to change the room and make it our own, so we painted it Behr's "Liberty". The furniture is from Ikea, the 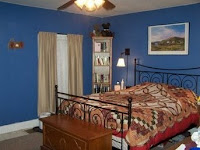 painting is of the west coast of Ireland (Clifden). We left the floor as it was, but bought a cheap remnant carpet just to throw over it. We did replace the pull light with a remote ceiling fan, which has made a huge difference in the amount of light {and air} in the room.
In Spring'11 I decided that we really needed to do something about our bedroom, plus we really needed more storage, since we had no closet.

For a Mother's Day present Matt built me a closet and I bought the paint to redo our room. The green wall was Martha Stewart's "Bay Leaf" and the cream was "Heavy Cream". We even repainted the floor to "Brook Trout", an awesome brownish-grey. The curtains I bought from JCP several years ago and added a black ribbon to them for a little bit of detail.

I still need to do a lot of decorating in here, but I'm waiting until we have family pictures done with the kiddos then I'll put a bunch of those up.

Email ThisBlogThis!Share to TwitterShare to FacebookShare to Pinterest
Filed under Home Renovations, Our Home