You can find this post on my new site, JessicaMWhite.com: Click HERE.
by Jessica White No comments:

Making Your Own Laundry Detergent

or the past year or so, I’ve been making our own laundry detergent. I had tried it a few years ago and was not impressed: The recipe didn’t come out right and I abhorred having this huge bucket in my laundry room. I knew there had to be a better way!

I searched and searched, sifting through different detergent recipes. Why did I need to have a 5 gallon bucket of WATER in my laundry room?! I found a few, but none of them were just what I wanted, so I tried and retried, coming up with my own recipe.

It takes me about 20 minutes from start to finish, then a few hours of sitting time, followed by a few minutes of the blending the ingredients. It probably costs us about $1.75, if that, to make up enough detergent to last us a month and a half.

Once we got this detergent figured out, I wanted to figure out how to make detergent for our diapers. We use Purex Free and Clear, but it still gets pricey. The thing with cloth diapers is you have to watch what chemicals you use, because some of them will breakdown the PUL fabric, causing diapers to leak.

Are you ready for this? Seriously, it might be really complicated.

Equal Parts of {I usually use 1.5 cups of each, to fit it in an OxyClean container}:

Blend together {I use my food processor, but putting it in a container and shaking it works too}, and store. Use about 2 TBSPs per load of nasty nappies. Again, this is probably 50cents to make for a month, if that.

Wow! That was tough!

I’m able to make a couple months supply of laundry and cloth diaper detergent in about 30 minutes or so, then it’s done. On to bigger and better things!

Email ThisBlogThis!Share to TwitterShare to FacebookShare to Pinterest
Filed under cloth diapers, Crafting

Potty training was one of those things that I absolutely dreaded. I’m not even sure why; I think it was this idea of a battle of the wills over using the toilet, and somehow my kids being in their teens and still wearing diapers. I’m not sure what, but it was something I dreaded.

We tried with Ave on occasion, before she was 2, but she was not interested. Every once in a while we’d see if she was interested, but she wasn’t. During the summer we decided to go sans-diaper for swimming lessons, and had no incidents of pool sharks. Then she started refusing to wear a diaper when I put her down for a nap….with no incidents. Then she started refusing to put a diaper on after the nap….with no incidents. By August, she was flat out refusing to ever put a diaper on, except at night time. And was having absolutely no accidents…even on a long car drive.

Within 2 weeks of all this we decided that we could officially claim she was potty trained, besides that one incident of her pooping in the backyard while she was outside playing (haha…it just didn’t look like the dogs’).

We had one poop incident in the fall, that I think was brought on by her cousin having an accident {I think she wanted to see how I would react}. She freaked after she did it, because the poop was all over her backside. I just reiterated that that’s why we use the potty and not our undies…and then laughed at how upset and disgusted she was by having pooped in her undies {not in her presence of course}.

At Christmas she decided that she didn’t want to wear a diaper at bed time. So I woke up every few hours to make sure that she got out of bed and went potty. Then she got sick and I insisted that she wear a diaper at night, because she needed to sleep and I was getting a bit tired of getting up several times a night, even when the babies didn’t need me.

I can now tell you that Avelyn has been entirely diaper free for almost 3 weeks…there was 1 incident, but it was my fault {I usually wake her at 10:30 or so and kept reading until I heard her crying at 11:15, that she’d wet the bed}.

So what’s the secret to potty training?

They’ll do it when their ready: No pressure. There is absolutely no point in forcing the kid to do it. It’s just going to be traumatic for them and you. And it’s all the more better if you can make it easier for them to do on their own. Summer works for us, because Ave is usually wearing a dress, which makes it very easy for her to go in the bathroom on her own and go. I honestly never even need to ask her anymore if she needs to go potty, she just does it when she needs to.

As for how to potty train triplets….that’s going to be another story, but we’ll probably take the same approach. But, for now, we only have 3 in diapers.

Email ThisBlogThis!Share to TwitterShare to FacebookShare to Pinterest
Filed under cloth diapers, Life with FOUR, Life with Lots of Littles, Miss A, Mommyhood, Parenting

Never really thought of myself as an Earth Momma, and I still don't, but I guess by some definitions I am. I don't think I ever intended to go that route either; it was more to save money. I'm talking about cloth diapers and making our own baby food.

Cloth diapers: How do I love thee?! I love thee to the depth and breadth and height...oh sorry. We bought 16 bum genius 3.0 and 24 (12 of 2 sizes) of prefolds with thirstie covers. In the beginning when A was tiny (at 8lbs lol) we used the smallest prefolds because they were small enough on her without being too bulky. We loved them. We thought we'd love them more than the BG3s.

Then we started using the BG3s. I love them more than anything! They're no more difficult to deal with than a regular diaper. It is a bit frustrating that so many of her pants are tight or don't fit when the top does because of the diaper, but we deal.

Before we decided to CD...I had asked a friend of our's how much they spent a month on diapers: $50-60 a month. Over the course of a child's life (assuming in diapers until 3) that's $2,160. Even if we replaced our entire CD wardrobe every 6 months it wouldn't cost that much. With me not working, and having next to no income we need to save money where ever we can.

And honestly the extra laundry isn't that big a deal. During the winter I have a drying rack we place over a heat grate and they dry in a couple of hours, in the summer on the clothes line. If it's rainy or I need them NOW I put them in the dryer for a bit. And I always have some 'sposies on hand in case I run out or have any emergency. Let me tell you those come in really handy for nosebleeds too (yea, I had one at the wedding and didn't have tissues).

It's not for everyone, but for us it's awesome and we love it!

As for baby food. I bought a 12 pack of Earth's Best Organic veggies and one of fruits; just to start A on with solids. From there I realized there wasn't much variety as to the Level 1 food choices. I found an awesome website called Wholesome Baby Food and they are a wealth of information. Everything from what foods at what ages as to recipes on how to prepare it.

I try to buy organic foods whenever we can. So far I've made carrots, butternut and acorn squash, avocados, and apples. I'm planning on making green beans later on this week. It's really not a lot of work and I know what she's actually getting.

One thing that makes it really easy is I have an immersion blender. I just put the steamed foods in a bowl and hit it with the blender. I freeze what we won't use in a couple of days and put the rest in little containers in the fridge. Not for everyone, but it is another way for us to save money
by Jessica White 8 comments:

Email ThisBlogThis!Share to TwitterShare to FacebookShare to Pinterest
Filed under cloth diapers, Miss A, Mommyhood, Parenting

The first of our cloth diapers arrived today: YAY! I will tell you that I'm actually rather scared of these things....I've never seen them in real life, so I didn't know what to expect. Of course, the first thing I did was go on one of the boards that I follow and ask "WHAT DO I DO FIRST?!" 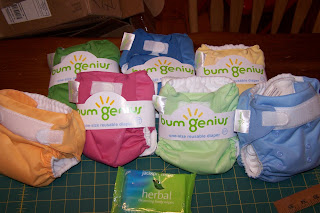 The diapers came today all cutely packaged with their inserts. Once I opened the first one I thought...oh my goodness, what are we getting into. I honestly was looking at them trying to figure out how to ASSEMBLE the stupid diaper. I googled "How to Assemble BumGenius 3.0 Diapers" and found this video.

Ok, well that's a lot easier than I thought it was going to be! I went and played with our's...it took me a little longer than the lady in the video, but I managed to get it together the way it's supposed to be. Now to wash and assemble them for use, and put them in the room (wow!).
by Jessica White 7 comments: