Fall Fridays ~ "From the Orchard to the Oven: The Pie in American Culture" 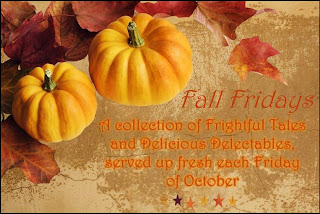 For this Friday's "Fall Friday" I decided to share the article I had written and submitted to Better Homes and Gardens (it wasn't published in their pie issue). Enjoy!

From the Orchard to the Oven: The Pie in American Society
by Jessica White 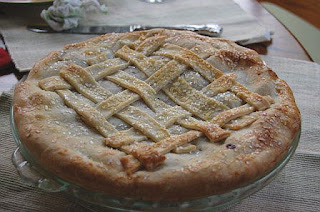 For centuries we, as Americans, have been filled with and by the wonder of pie. To many it is not just a dessert, but an enduring symbol of home, of America. Pies permeate every aspect of our lives: we sing about pies, watch movies in which a pie becomes a central character, and we enjoy eating them whenever possible. Whole contests are dedicated to their singular deliciousness: Whether it be baking them or eating them.

A pie is an entity unto itself, secure in its position in America: It is threatened by no other dessert. A pie is more than just a yummy treat reserved for Autumn and Thanksgiving, after the fruit has been harvested. Pies are the epitome of the old cliché: “a labor of love”. From start to finish they require the continual scrutiny of its creator, demanding attention to each minute detail.

For any pie it is the crust that is the foundation; it alone will determine whether a pie succeeds or fails. The creation of a piecrust can only be mastered if the baker puts all of their attention into their dough and its every “need”: too much flour and it will crumble, too much water and it will stick, too much handling and it will never become a crust. Whether the crust is homemade or not, the baker is always conscious of the necessity for the perfect crust.

Fruit for a pie must be carefully picked, each piece gingerly removed from its lifeline and tenderly placed in a basket. Then there is the preparation: cleaning and slicing each piece of fruit, folding in the perfect ratios of spices and sugars, imperative to the successful flavor of each pie: Until it is perfectly nestled into the crust.

When all of this is said and done the power of pie still does not come to fruition until the sweet aromas of baking fruit, sugar, and crust, begin to permeate throughout the home. This euphoric sinus experience is so profound, holds so many memories and emotions, that candle and air freshener companies alike have attempted to replicate the singular gloriousness of a pie baking. All have succeeded at falling short of its glory.

Pies are more than just a wonderful dessert. We each have our own special collection of images and sensory experiences that come to mind when we smell, taste, or even think of pie. It is because of all the effort and love that goes in to each slice that people are reminded of warmth and home. That place in which we can find comfort and love: Every element that pie invokes in each person.

While some may see it as silly to say that pies are representative of Americans, there is a reason for the phrase “As American as apple pie”. It has nothing to do with whether or not we “invented” pies, it is seems to have everything to do with how pies embody the spirit of America: All of its labors and looks.

Pies are not anything extravagant, they are nothing fancy to look at. They won’t collapse or fail to rise; they aren’t a sugary confection that must be handled with delicacy. Americans are hearty people, people who can weather any phenomenon and still stand strong. Like a pie there is nothing exaggerated about our demeanor or persona, it is what is inside of us that make us what we are: strong, hearty, and hard working.

Pies in all their simplicity are representative of an entire country, our homes, and the hard work and determination of a sole being. They are as varied as the people of this great country: Each bringing their own flavors and colors. Pies will last, not because they are fancy and extraordinary; they will last because they are “plain and simple”. Because of all that they bring to mind and represent. Pies are the emblem of America, her citizens, and its culture: Pies are not something to be taken lightly.

Email ThisBlogThis!Share to TwitterShare to FacebookShare to Pinterest
Filed under Fall Fridays, Writing